Yes, yes, it’s been next to forever since I’ve updated The Man Who Cooks. Lots of life events, transitions, and just plain laziness stood in the way. I thought about letting this little domain lapse into the ether, but thanks to a flash of inspiration around Vine Headquarters, I thought I’d get back in the ring and take another swing.

What’s the inspiration? A big-ass patch of basil, that’s what.

Fresh basil. Can’t live without the stuff during summertime. There’s something about the soil and sunlight in our garden, though – the stuff grows out of control if we don’t continually chop it back. Even with our barbering, we end up with jar after jar of frozen pesto at the end of the season.

I’m not saying that’s necessarily a negative, mind you, but I know I’m not alone here. Basil tastes best when it’s new. If you leave a basil plant to its own devices, the leaves lose some flavor, the stems get woody, and it’s just not as good.

To keep waste to a minimum, we decided to “repurpose” the basil by incorporating the stuff into as many things as we could this summer. Our attempts will follow.

Here’s the first installment. This pasta, adapted from a Food & Wine recipe, makes a really nice summertime pasta. The original recipe called for cilantro, but I think the basil’s spiciness gives a nice counterpoint.

Heat the broiler. Rub the flank steak with the 1 teaspoon oil, 1/2 teaspoon of the chili powder, and 1/4 teaspoon of the salt. Broil until medium rare, about 5 minutes per side. Let it rest for 5 minutes and then cut it into thin slices.

In a large glass or stainless-steel bowl, combine the pineapple, the remaining oil, the jalapeño pepper, shallot, lime juice, bail, black pepper, and the remaining 1/2 teaspoon salt and 1/4 teaspoon chili powder. Stir in the sliced steak.

In a large pot of boiling, salted water, cook the penne until just done. Drain and toss with the salsa and steak. 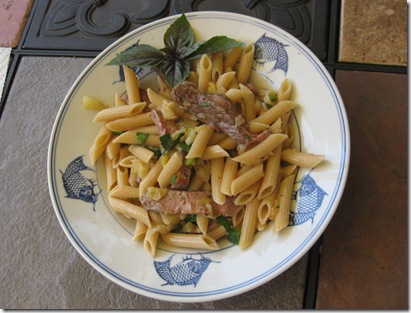 Served this with a glass of Albarino. Tasty, tasty lunch...