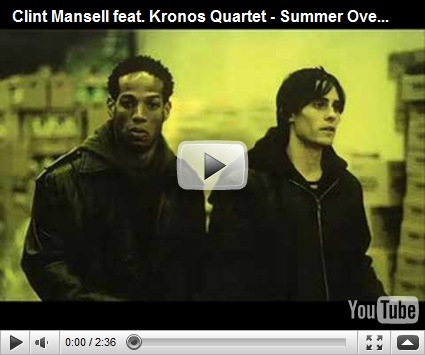 I’ve focused a lot on meals you can make when you’re in a hurry, but what if you’re lucky enough to find yourself with a little extra time on your hand? Sure, you could go into a long, involved cooking session, but why not make something you can just check on while you’re doing other things?

I was poking around Epicurious to find something that might tickle my palate and I stumbled across a chicken thigh recipe that looked fairly interesting. I snagged the ingredients for it and a couple of sides.

In case you don’t know, chicken thighs are the bomb. Any recipe that calls for chicken breasts, I often will substitute thighs. Why? The meat’s juicier and more tender. Sure, you have to deal with an extra 70 calories, but pull the skin, trim the fat, and take a walk around the block afterwards. It’s one of the few things in the world that’s cheaper but tastes better. Worth the trouble.

Preheat oven to 425. Put the potatoes, onion, & carrots in a roasting pan. Season with salt and pepper. Drizzle liberally with olive oil. Stir the lot to coat. Put it in the oven for 45 minutes, stirring about every 15 .

Whisk together the orange juice, broth, mustard, Tabasco, honey, and Creole seasoning. Heat olive oil in a large heavy skillet over medium high heat. Season chicken thighs with salt & pepper on both sides and put in skillet. Brown on both sides for about 3 minutes, then add the juice/broth mixture. Bring to a boil, reduce heat to low, and simmer uncovered for about 20 minutes, flipping the chicken after 10. Check for doneness. If the chicken is done, remove from heat. If not, simmer until it is. (Start this step around the time you’ve stirred the potatoes & carrots for the second time.)

Meanwhile, put the beans in a small roasting pan and add a couple of cloves of minced garlic, olive oil, salt, and pepper. Stir it all together. When the potatoes have cooked for 45 minutes, take them out of the oven. Add a splash of olive oil and the rosemary to the potatoes. Stir. Put both the potatoes and beans back in the oven for 15 minutes. 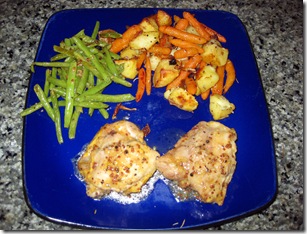 If you want, you can take the chicken out of the sauce, boil the sauce down, and make a thicker version. Myself, I just plated everything up and ladled a little of the sauce over the chicken and splashed the beans with it. Making the liquid into an actual sauce would be very tasty, though. If you take the time to reduce the sauce, throw the chicken back in there at the end for a minute to warm it back up.

You’ll end up with something like this. Looks tasty, no?