After you’ve been cooking for yourself for awhile, you’ll start to notice flavors and flavor combinations that you especially like. You’ll find yourself collecting recipes that mirror those likes. Since you like them so much, they’re pleasurable – and since they’re similar, it occasionally starts blending together.

If you remember from back over on The Naked Vine, on one of our New Year’s Eves, the Sweet Partner in Crime went nuts with Giuliano Hazan’s “Every Night Italian.” We worked our way through great chunks of that cookbook, and there were two recipes we really liked: “Grilled chicken breast stuffed with asparagus and fontina” and “Chicken Breast Fillets Rolled with Pancetta, Rosemary, and Sage.”

When we went to the store, we ended up getting a mishmash of ingredients. We did get the chicken breasts, but we ended up with prosciutto instead of pancetta, asparagus, fontina, and some random grape tomatoes. 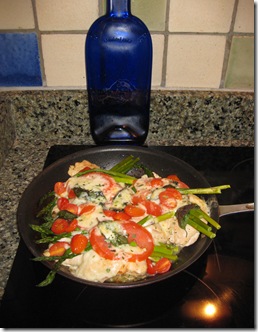 First off, the actual recipe called for wrapping these things up and grilling. But two things prevented that: 1) I was tired and wanted no part of the grill that night, and 2) the chicken breasts, even after butterflying, were not easily rolled with the stuffing. Since everything was falling out anyway, we made two major adjustments: 1) cooking the chicken on stove instead of on the grill and 2) not rolling ingredients into cooked chicken....just putting everything on top instead.

Anyway, sans grill, we cooked the chicken in about 1 T of oil until slightly brown, about 3-4 minutes per side, adding the prosciutto halfway through. We then essentially braised the chicken and prosciutto (with lid on) in 3/4 cup of white wine until more or less done (about 10-15 minutes). At that point, all the wine had cooked off or cooked into the chicken (yummy). We also "pre-cooked" the asparagus in a skillet on high heat with a cup of water and salt for 4-5 minutes, then drained it. We added the cheese, asparagus and tomatoes to the chicken and put the whole thing under the broiler for about 3-5 minutes.

If you're following this recipe, at this point, take it out and check for done-ness. 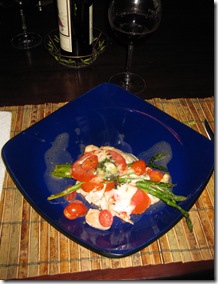 If it’s done, then plate it up, crack a bottle of light Italian red, and go to town.

The moral of this story isn’t that you need to make sure you have every ingredient you need clearly listed when you head to the store. It’s that when you start to figure out the tastes you like, you can grab things you like (in our case, chicken, tomatoes, asparagus) and cobble something together that both looks and tastes good when you’re pressed for time. Whether you’ve had a tiring day at the office or made a last minute dinner invite, trust what you like and you won’t go wrong.

(Many thanks to the SPinC for some corrections to the recipe.)
Posted by The Naked Vine at Tuesday, April 06, 2010