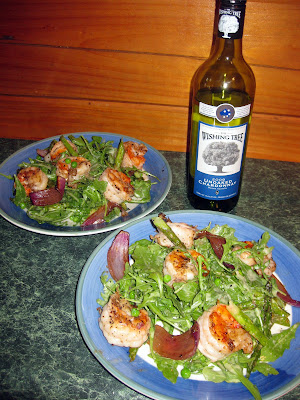 Light your grill. Preheat oven to 425. Toss red onion wedges with salt, pepper, and olive oil. Roast until soft and starting to caramelize, stirring a couple of times -- about 10-15 minutes.

Shell prawns. Toss with salt, pepper, and olive oil. Thread on skewers and grill until cooked through -- 2-3 minutes per side.

Blanch peas by dropping into boiling water for 30 seconds. Immediately drain and rinse with cold water.

Cut asparagus on the diagonal into 3-4" pieces. Toss rocket, peas, onion, and asparagus with dressing. Remove prawns from skewers and arrange on top. Season with salt and pepper as desired.
Posted by The Naked Vine at Thursday, January 03, 2013