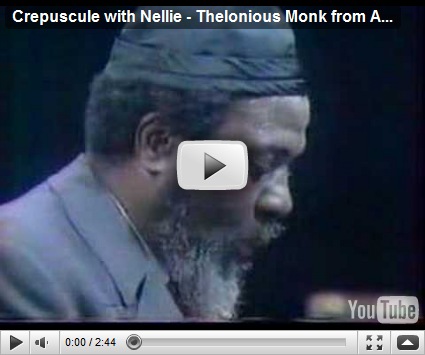 I've stumped the fish folk at Kroger twice with monkfish.

Both times, I've seen filets that looked pretty good, and the Krogerman handing it to me has said, "I've never known what to do with that." The answer? Grill it. There are any number of ways you can make it, and I've tried several. I remain a fan of the fire.

You'll sometimes see monkfish called "poor man's lobster." (It's also known as "goosefish.") The flavor and consistency is indeed akin. At under $10 a pound, it's worth thinking about for that kind of flavor -- especially when that flavor is paired with that wonderful Latin-esque sausage, chorizo.

Monkfish and chorizo. Like chocolate and peanut butter. Two great tastes that taste great together. There;s something about the richness of the fish with the spice and fat of the chorizo that just works well together. They're great together in things like paella. but grilling them is best, in my opinion. Since we're still in a surprisingly good patch of weather for early March, we fired up the grill again. My favorite way to pair these two has always been kebabs with some good veggies.

We got the grill fired up and got some yellow rice going. This particular kebab iteration required me to pre-cook a few links of chorizo. Put three links in a skillet with ½ cup of water. Cooked them for 12 minutes, turning once, then cooking uncovered, turning as necessary (brown 'em!) for 3-4 minutes. Set the links aside to cool. Cut up the veggies (tomatoes, peppers, & mushrooms in this case, but you can use whatever you like) and monkfish into good sized chunks: 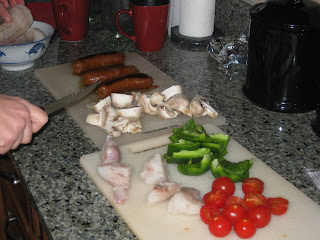 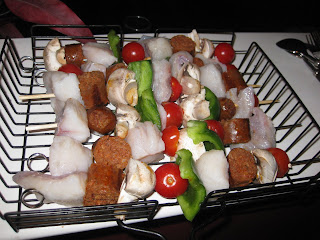 The grill should be hot by now, so put the kebabs over fire. Medium to high heat, 5-7 minutes on a side. I like using a grill basket, simply for neatness and ease of use. If you do use one of those, cook more towards the longer time. Then plate up a bed of rice, take the chunks off the skewers and arrange. Top the lot with salt and pepper.

We did a side by side of an inexpensive pinot noir (Lurton, a French pinot noir table wine) and Black Box Sauvignon Blanc. 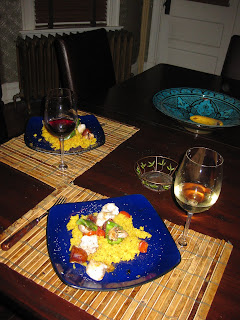 Both wines worked fine. I liked the pinot, the Sweet Partner in Crime enjoyed the white. Either way, a very easy to cobble together, nice looking dinner, if you don't mind doing a little chopping.

Total time start to finish: just under an hour.


The night was young once we finished, so we decided to enjoy the good weather and the patio-friendly temperatures while we could. We started a fire and got rid of the last of the holiday greenery. Poured some more wine and had some chocolate. A nice way to end a fairly crazy day... 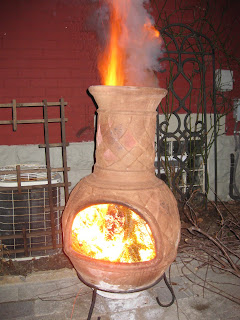 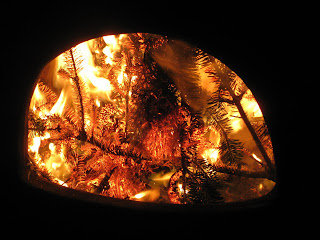