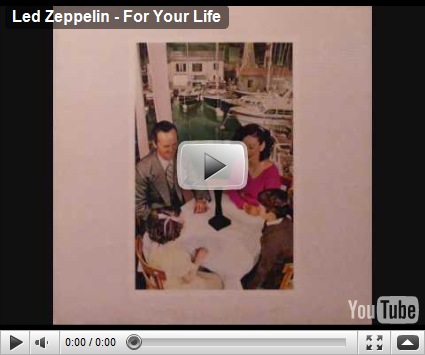 Hello all. I'm back from my jaunt to New Orleans to see some of my far flung friends, to overdose on basketball, and, of course, to get some good meals. The highlights? K-Paul's Louisiana Kitchen, the flagship of Paul Prudhomme's restaurants (beef tenders in debris. Zowie!); breakfast at Mother's, “home of the world’s best baked ham," where the homemade spicy smoked sausage will knock your socks off; and the chicken friand & raspberry-filled croissant I had at Croissant d'Or. As another dear friend of mine would say, "gismic." I could go on about the Central Grocery muffulleta, or the happy hour at Lüke with the 25 cent oysters, but we have other things to get to. The lowlight? Some kind of virus that smacked 2/3 of our little group on Saturday that left many of us taking inventory of some of that food for a second time. (Not food poisoning, we decided...the timing would have been wrong for that many of us to get sick.)
In any case, I returned home and the Sweet Partner had to head out to help her dad after successful cataract surgery. I needed to put some food together for myself, and I decided -- both since my stomach was still a little iffy and because our weather got chilly again, that I wanted something soupy. For some reason, pho sounded good.
If you're not familiar, pho is a Vietnamese soup which originated as a breakfast meal. It's basically a beef stock with whatever's handy thrown in. I fell in love with the stuff at Cilantro, this fantastic little lunch counter near the University of Cincinnati where I work. Making it "authentically," however, requires boiling up stock, a lot of straining, and a lot of time. 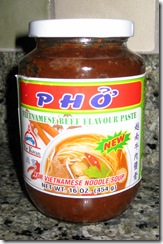 I made a trip to Lansing, Michigan several months ago to visit a pal, and I brought a wonderful discovery back from an Asian grocery -- pho paste. It's not quite as good as the homemade stock, but I still think it's pretty daggone workable. I've since discovered that most Asian groceries have a jar or two of this, so you should be able to find it or get it ordered to a good grocery of some kind without too much trouble.
So, for this evening's work (measurements approximate -- aren't you proud, Sweetie?): 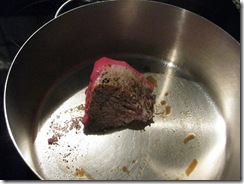 Get a soup pot and heat a little olive oil over medium-high heat. Sear the filet until brown all over. Remove from pot. Add the water and bring to a boil.
Slice the filet thinly. Add noodles to boiling water. Cook until about five minutes are remaining in the noodle-making process. Add everything else but the herbs and tomatoes. Simmer until noodles are done. (That's if you simmer the noodles. If you are boiling them, take it down to about 2 minutes, reduce the heat, and simmer until done.) Stir in the tomatoes and herbs. Bowl it up. Grab some chopsticks. Chow down. 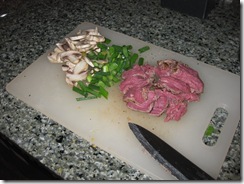 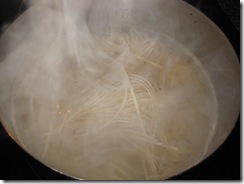 Pho also usually has hot pepper -- ordinarily, I'd have diced a jalapeno and added that, but I eliminated it for a couple of reasons. First, my tummy's still a little iffy, so I didn't want to overdo the heat. Also, sriracha (the now-ubiquitous chili sauce) can be used to control the heat level, and I prefer that flavor.
Some "traditionalists" might also note that the usual serving method is to put the noodles, etc. into the bowls and ladle the broth over. Others may offer that there are no tomatoes or mushrooms in pho. To those folks, I offer a heartfelt "bite me."
Here's what I ended up with: 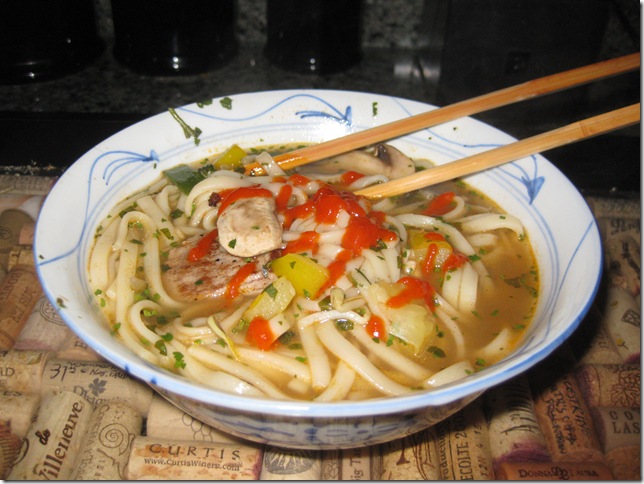 Start to finish: half an hour
Posted by The Naked Vine at Monday, March 22, 2010