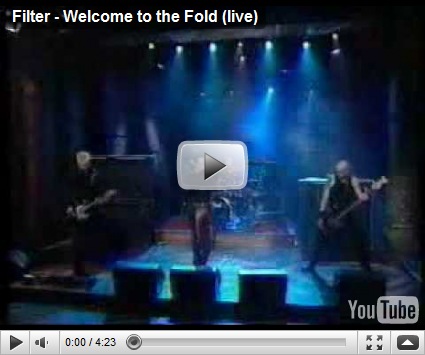 Greetings! I'm Mike. If you've made your way here, you like flavor.

Some of you have found your way over from The Naked Vine, my wine review site. Some of you have stumbled here from a lucky google. Regardless, welcome -- pull up a chair and grab a fork. 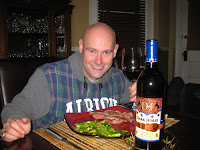 If you want to skip ahead to the food, scroll down to the stars...

Like most guys, my first experience cooking was when I left college and entered bachelorhood. My cooking was uncomplicated. I was just trying to feed myself, so I went the "quick and easy" route first. I was a fifth-degree black belt in tuna mac. That gets old quickly, so I branched out a bit. Anything with "quick" or "one dish" in the title drew my attention. I would make huge tubs full of Joel's Gonga-Getti (see the bottom of this post); square yards of my "semi-sagna"; and a beef stew that would knock anyone's socks off. Best of all? Leftovers. Lots of leftovers. I didn't need to buy lunch at work which, as you know, saves a ton of cash and left me more beer money.

Enter Pam, my now-wifey. Pam was a basketball fan, which made her significant-otherable immediately. We officially started dating on a cold December day in 2001 after watching Jay Williams light up Rashaad Carruth. As we got to know each other, I quickly discovered that I was completely out of my culinary league. So between my ardor and Pam's own level of culture, I taught myself to cook.

Then we mutually discovered wine.

Aside from the general yumminess of The Grape, we were fascinated by the way wine paired with food. As a couple of former potential chem majors, we wanted to understand why things worked as food and wine meshed. We plowed through Kevin Zraly's Wines of the World book and embraced the whole "so, what will go best this wine?" thing.

So, along came The Naked Vine -- which still moves forth if you're looking for some easy to understand wine info. I'd done it for going on four years, and I was starting to feel a little burned out. Both Pam and friend of the Vine David L. noted that the Vine, over the years, was focusing more on wine pairings than on wine alone. Along came the crystallizing moment. Our friend Jeff's birthday present to his wife, the Rev. Christine -- 12 meals, 12 wine pairings. The first of which is documented here in all its glory. Jeff inspired me. I decided to start this food blog.

Trouble is, both Pam and I lead pretty busy lives. We both work full time, and when we get home at the end of the day, we're spent. Two hours slaving over a hot stove -- not gonna happen. But neither of us wants to simply peel back the foil over the apple crisp on a couple of Hungry Man TV dinners and call it chow time.

Really good cooking doesn't need to take a lot of time. Dinners don't necessarily require extensive food prep. For example, I recently saw a recipe for a normally-simple tamale pie that had a 34-item ingredient list and required grinding a spice mélange. I can get it down to half that and taste as good to anyone who's going to be following along here.

We're constantly on the lookout for flavorful, wine pair-able recipes that won't take all night to throw together. We've done a pretty damned good job in the search, if I say so myself.

I'd like you to join us on our tour through the world of lazy gourmet cooking. The main characters in this little narrative will be myself, the aforementioned Man Who Cooks, and Pam, henceforth known as the Sweet Partner in Crime.

Life's too short to eat bland food, so let's get it started...

The Sweet Partner in Crime walked into Kroger and got inspired by the first good-looking asparagus we'd seen in awhile. She snagged a bunch, and thought flank steak would make a good entrée.

[Remember -- there's no need to start with an entrée. If there's a side you want to try, it's easy enough to cobble together a menu around that instead. Takes the pressure off a bit.]

So, we ended up with this hunk of meat. Flank steak is meat made for marinating. We had some sesame-ginger vinaigrette in the fridge. I don't buy a lot of bottled dressing. I'd much rather simply throw some good olive oil together with vinegar and some spices. Store bought dressings tend to be average on salads at best, but if they're vinaigrettes, they make good marinades.

So, into a Ziploc bag went the meat, the vinaigrette, the juice of half a lime, and a bunch of minced garlic. Rather then the recommended couple of hours, the meat went into the fridge when we left for work. So, by the time we took it out of the fridge, we'd made meat ceviche.

We got home and I got the grill ready for the first time this season. Once it got up to high heat, I threw the extremely tender slab of meat on the grill after wiping off the marinade. Don't skip this step...your grill will flare something awful. I judged doneness by using a "poke test." If it doesn't spring back, give it more time -- when it does, get it off there! It cooked very quickly. Probably 6 minutes total, and I would have cooked it a tad less if I'd had it to do over again. Brought in the slab, covered it in foil, and let it rest for 10 minutes.

Meanwhile, the SPinC cut the asparagus into 2-inch or so pieces, slicing each piece on a 45 degree angle. She melted a little butter in a little olive oil in a skillet over medium heat and sautéed some more minced garlic, then added the asparagus. She sautéed the asparagus until it was almost tender, then added a teaspoon of chopped up crystallized ginger, salt, pepper, and a little bit of white wine. 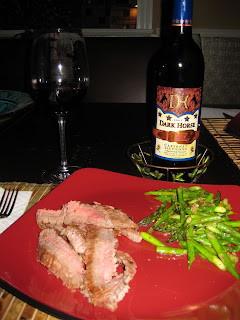 I did my best to slice the flank steak against the grain at a perfect 45 degree angle. It sort of worked. Our little tenderizing project worked too well...the pieces would rip apart easily. But hey, small price to pay to make a tasty meal out of an inexpensive cut of beef. The meat ended up a little more done than I would have liked, but the soy-ginger flavor permeated the meat. Tasty stuff. The asparagus rocked. And the wine -- well...properly done California Cabernet. You tell me...


We served this with Dark Horse 2005 Cabernet Sauvignon. Dark Horse was one of the first wines we fell in love with on our first trip to Sonoma years ago. A delicious pairing to end a long work week.

Start to finish: half an hour.

And in case you were curious:

Taste sauce. Add salt, pepper, and spice as necessary. Return pasta to pot. Add sauce. Stir to mix. Bowl up and top with shredded parmesan.
Posted by The Naked Vine at Monday, March 08, 2010