Something very simple tonight. Both the Sweet Partner in Crime and I had had some draining circumstances and we just wanted something easy. So, not surprisingly, we fired up the grill. 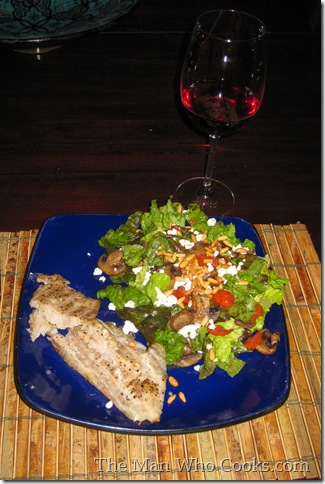 We had grouper filets to work with this evening. They were cut pretty thin (we wondered if people were using them for Lenten fish fries…eek!) but they had some substance. Simply drizzled them with olive oil and sprinkled them with a little Kroger “Peppercorn Spice Rub” that we had, then put the filets in a grill basket.
Meanwhile, oven was heated to 425. We took some pine nuts and put them in a baking pan. In another baking pan, we put some halved grape tomatoes and thinly sliced mushrooms, salt, pepper, olive oil, and basil. Both went in the oven. The nuts came out in 10 minutes, the vegetables in 20.

I took the basket outside and put it on the grill over medium-high heat. Cooked it for 3 minutes on a side and checked for doneness. I think these might have still been frozen in the middle since the cooking was a little uneven, so I cut the heat down a little bit and gave them a couple more minutes. Once the filets flaked easily, I brought them in.

Meanwhile, the SPinC whipped up a dressing out of the juice of a lemon, some white wine, olive oil, salt, pepper, balsamic vinegar, and a bunch of garlic. She made a bed of torn Boston lettuce, put the roasted veggies on top, poured a little of the vinaigrette over that, then topped it with feta crumbles and the pine nuts.

It turned out wonderfully. Here it is:

Start to finish: half an hour
Posted by The Naked Vine at Wednesday, March 24, 2010